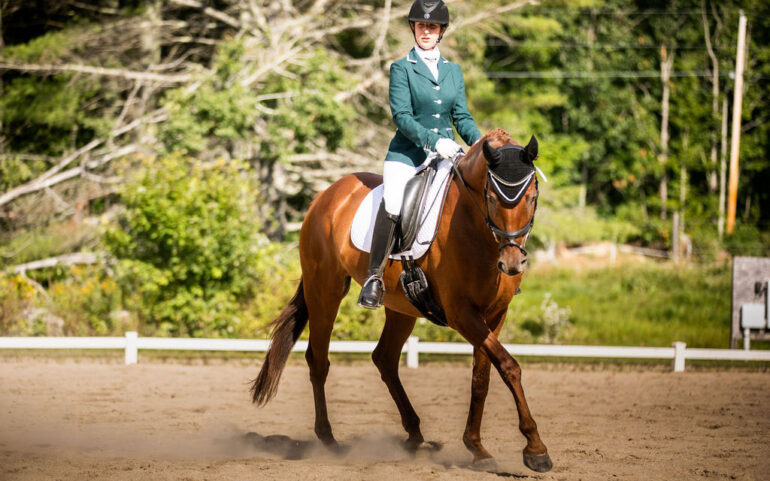 September 13, 2020 – The final schooling show on the schedule of Vienna Farm’s season took us back to Hollis Equestrian Park for SMDA’s final hosted show. The judge was a familiar face, Laura Mitchell (L with distinction.) The goals of this final show? Earn Pam her second score needed for her SMDA bronze medal and get Maggie her final score needed for year-end awards. Good comments were also going to help prepare for GAIG/USDF Region 8 Championships approaching that next week. By now, everyone was well versed and practiced at the requirements expected of them – from adequate masking, social distancing and sanitizing to the acceptable times allowed on grounds (1 hour prior, 1 hour after.) We thank the volunteers who spent their day running the shows we attended this year.

Pam Coulling rode Cloud in the same tests as Scarlet Day, but this time in the “big” ring as SMDA did not offer ring changes to a smaller configuration as is common for the lower level tests. There are pros and cons to each configuration – but Pam and Cloud handled the change like professionals. Riding Intro C first, the pair scored a 63.75%, winning their class. This was also the final score they needed for their bronze medal! With that accomplished, Pam still rode her second test Intro B for a 65.313% placing third. Goal number one of the day accomplished!

Maggie Knowlton and Andy were poised for their final test to qualify for year-end awards. While the goal was a full test and score, the other goal was a higher score than at the beginning of the year from Scarlet Day Farm’s show. Taking the judge’s previous comments into consideration for this ride, the pair put in another consistent test to score a 67.361%, finishing first in her class again. Goal two of the show accomplished.

Now, it was onward to the first USDF/USEF Recognized show of the year for Vienna Farm!