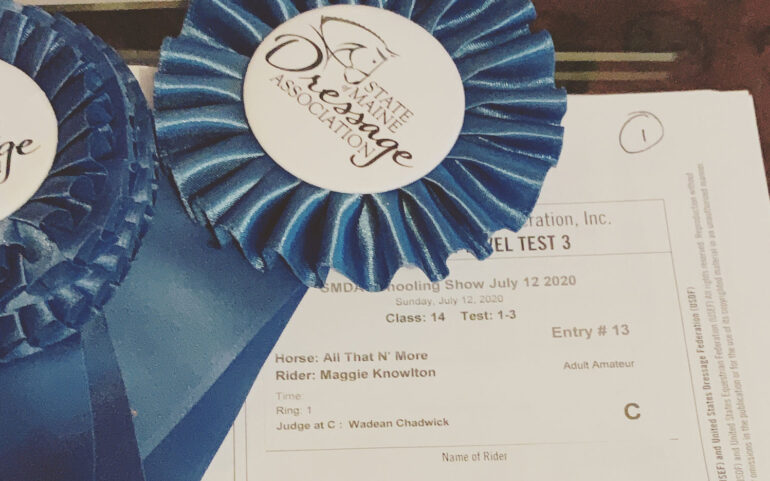 July 12, 2020 – Just two short weeks later from the first show of the season, around came the second. Still only a schooling show, but with hope of what the future could hold as shows continued to become more accessible and open with precautions. This time, our crew trailered to Hollis Equestrian Park for a SMDA schooling show. The original date had been set to be a USEF/USDF Recognized event but was changed due to difficulty of quarantine requirements for the Technical Delegate and the Judge. Because they had already rented the space, the club decided to put on a schooling show for their members. The club had already had to cancel their May show and didn’t want to have to cancel another. It followed the same “Show & Go” format, where rides were scheduled by trailer and barns. It was still a very weird feeling to pack up after your ride and leave the grounds without knowing at least a score. The judge was Wadean Chadwick (L). Two riders meant two helpers – Tanya Rennie as coach and our unsung hero and trailer master, Jim Jaeger.

Susan Danly went to her only show of the season with the intentions of rounding out her final scores needed for the SMDA Bronze medal. That’s two scores above 60% at Introductory Level and three scores above 60% at Training Level. Susan and her own Grayson rode a test focusing on relaxation – and won their class with a 60.552%. A qualifying score! Susan had earned her bronze medal and will receive it this winter during the club’s banquet.

Maggie Knowlton again rode All That N’ More at First level, aiming for Year-End Awards with SMDA. Four scores are required to qualify. She attributes one of the most consistent and amazing rides to the clinic held at Vienna the Wednesday before with Liz Austin. With a score of 75.694%, she not only won her class, but High Point of the day for Adult Amateurs. As Tanya says, “Sometimes my students just need to hear the same things I’ve been saying, but from someone else!”