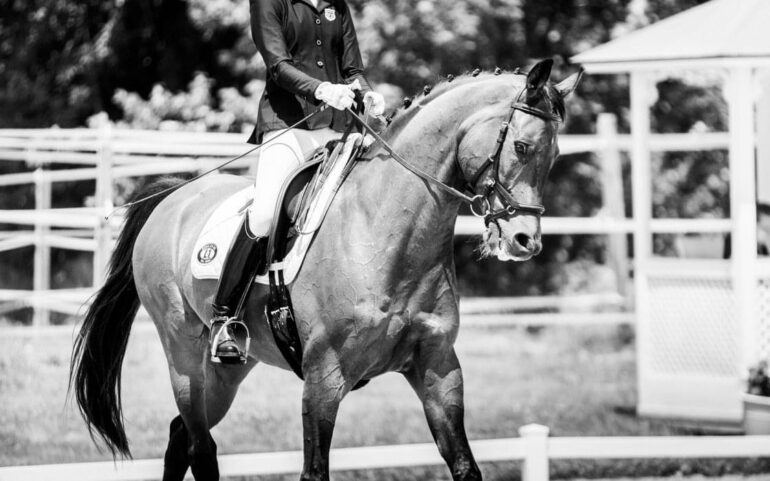 June 28, 2020 – Vienna Farm finally left the barn for a local schooling show, only about 2 months later than anticipated. A few students loaded up their horses to attend Scarlet Day Farm’s schooling show judged by Laura Mitchell (L with distinction). This was one of the first local shows to run with precautions adequate to protect those competing from the pandemic. Firstly, ride times were grouped by barn and trailer to help alleviate the number of people on grounds. This meant a judge could go from a Training Level test to a Fourth Level test! The judges did great, showing the aptitude of our local Maine judges. There were no spectators allowed and each rider was allowed only one helper (a coach or groom.) With our two riders, that meant two helpers.

Sophia Chavonelle brought her wonderful gelding Spotlight W out to test the waters at 4-3, a test they were comfortable competing after many years rehabbing injuries. The pair had a lovely test in the sun. They scored a great 65.694% to win their class!

Maggie Knowlton rode Nylah Lyman’s horse All That N’ More (Andy) in their first level debut. Conservative was the name of the game as the pair learned where to push and how to maintain good tension, not the bad. They won their test and class as well, earning a 63.611%.

The two girls are thankful to both their coach Tanya Rennie, trailer driver and groom Pete Chavonelle, and the farm Scarlet Day for hosting a show despite the challenges presented. Humor and spirits were high, despite how weird it felt to get on the trailer to head home without knowing your score and placing! At least Sophia learned about a classic Sesame Street Character; “One boot, hahaha. Two boots, hahaha.” (Count von Count)