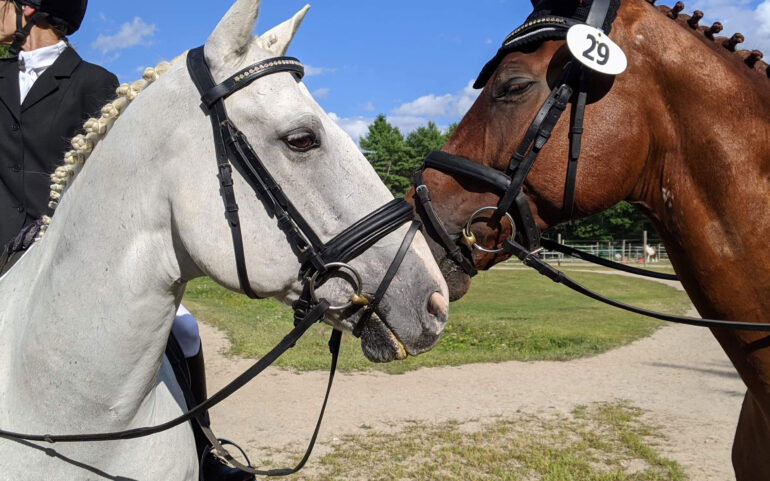 September 6, 2020 – August was a quiet month from showing, but it was good set up for schooling and preparations for a VERY busy September show season. Every week except for the last weekend, Vienna Farm was hauling somewhere for a horse show. We returned once again to a social distant Show & Go format show at Scarlet Day Farm in Gray Maine. A very full show once again – it’s nice to see these local shows having so many riders supporting them. The judge was Jane Tremlett (L) – a change from an originally scheduled judge from out of state. The schooling shows hosted by Scarlet Day qualified for both SMDA year-end awards and medals, as well as USDF’s new Schooling Show Awards Program.

Pam Coulling took Elena Raymond’s school horse-extraordinaire Cloud, whom Pam leases, out for the first time in a year! The goal was to earn Pam her two missing scores for her SMDA Bronze Medal. Scores must be from two different judges, but this would give her a good start. She surprisingly had never showed Intro level before now! Pam rode two tests, getting better each ride. Her first ride at Intro B scored a 63.438% for 2nd and her second ride at Intro C earned a 63.5% and a 3rd place ribbon. Qualifying score from one judge, accomplished.

Maggie Knowlton and All That N’ More travelled again, though we weren’t entirely sure this would happen! Exactly a month to the day, Andy had his 7 remaining (many had already been removed prior) incisors extracted surgically due to a diagnosis of EOTRH. His tooth roots were rotted away, reabsorbing the tops of his teeth. He recovered so quickly and was so much more comfortable. Imagine if you had a tooth ache for years! Having ridden for this judge before, the pair knew where they could gain some extra points and what was expected. Just happy to be there, but even happier with the score and placing; winning their class with a 68.611%.